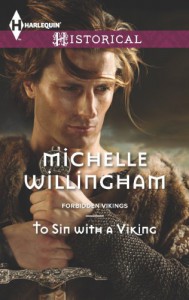 I don’t normally read Harlequin historical romances but To Sin with a Viking sounded really interesting so I thought I would give it a go.

I really loved the story it was engaging and romantic. I liked the way it built up and the journey it took me on. The writing was good, I was able to envision everything perfectly 99% of the time, but was pulled out by the occasional bits of more modern vocabulary that snuck in. There were also a few bits that felt out of place to me, like the whole divorce business which I thought wasn’t around in the times of Vikings. But I am no historian so I can’t be sure.

I really liked the characters especially Styr. I felt quite sorry for him, he was stuck in a loveless marriage with a woman who shunned his affection and was so uptight that she would net even make love without her clothes on. He was determined to do the best by her despite all that even when he fell in love with Caragh. He was kind and sweet with real depth and personality.

I also liked Caragh she was determined to do the best by her family no matter the personal cost. I did think her affections for Styr were sometimes a little heavy handed considering he was married, but for the most part I liked her.

The romance was pretty intense probably due to the forbidden and mostly non-physical aspect of Caragh and Styr’s relationship, this is not about adultery (although there are a few stolen kisses and touches) it is a love story between two people who want to be together but can’t be, I really enjoyed it.