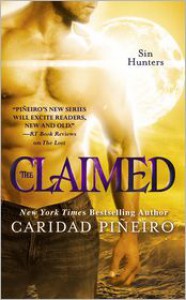 The publisher provided me with a copy of this book for review.


The Claimed by Caridad Pineiro is the second book in the Sin Hunters series. I have not read the first book (The Lost) but was still able to understand and follow this one. It can be read as part of a series or as a stand-alone.

This Claimed started very slowly and not very much seemed to happen at the beginning. It was readable but not terribly interesting. From the half-way point and especially towards the end the book really picked up and become a lot more interesting. There were a lot of action scenes which was great but at times it was hard to follow. Most of the problems I had with not only the action scenes but the book as a whole were the use of aura and colours, something that is heavily used in this book. It seemed to be mentioned in nearly every description and I struggled to picture all the aura’s, flashing lights and various other colourful things these ‘Hunters’ possess. It did work at but was over used.

The characters were nice. Victoria is smart, she has a lot of pressure put on her but she handles it well. I really liked the tension between her and her parents (a storyline that was unfortunately dropped half way through) these moments really allowed you to see her strength. Christopher was a nice guy and a good leaded. The relationship between them is nice (I am a sucker for forbidden romances) it had all the right elements but I just never felt the chemistry between them. What I liked was that they didn’t do anything stupid. I never doubted their trust in each other and never though their relationship would fall apart. It made a nice change as that is something we tend to see a lot in romance books.

I feel like I got to know Victoria really well. There was a lot of effort put in to making her a well-rounded and complete character, but the same cannot be said for Christopher. I felt like I didn’t know much about him at all (even though part of the book is told from his POV) without his half everything was not as intense as it could have been and I didn’t care about their relationship as much as I should have.

The Claimed is an interesting take on the PNR genre but somehow doesn’t have the explosiveness of other books out there. It was good and entertaining enough but didn’t have that wow factor. Despite that I will be checking out the first book in the series and the follow up to this one.