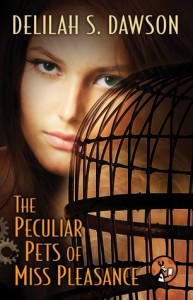 I really enjoy Delilah S Dawson’s Blud series; I think it is entertaining and well written. So far she has not created a character I dislike and that didn’t change after reading The Peculiar Pets of Miss Pleasance.

Frannie is a great lead character; she is strong, kind and likeable from beginning to end. She has no problem standing up for herself which I also liked. I was in love with Scottish fireman Thom the moment he appeared. He is completely devastating, charming, tough and brave with a kind and helpful nature. I really liked the chemistry between him and Frannie, they were clearly perfect for one another.

The other main character is the useless yet adorable Casper, Frannies lodger. Casper is a famous musician and full time drunk. He is hansom and talented but cannot stop himself from causing trouble. Despite that I really liked him and cannot wait to read more about him in the upcoming books in the series.

Despite the good characters there were times where I felt the story dragged a little and I would have liked the steampunk element to have been bigger, but apart from that it was very enjoyable.