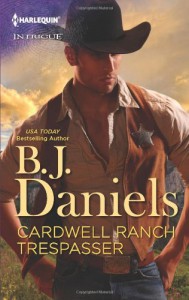 I quite like western romantic thrillers so this is not the first time I have come across B.J Daniels. In general I quite like her books and Cardwell Ranch Trespasser was no exception.

Like the other books I have read by this author the thriller aspect of the storyline was a lot better and a lot more important than the romance, which is more of a sub-plot. Often books rely too heavily on the romantic side and the story suffers for it but that was not the case here. I liked the plot in this, it was interesting and well developed. What helped were the good characters and the interesting dynamics between them.

Despite having an awful name I quite liked Hilde. She is smart, brave and loyal. She was determined to help her best friend Dana, ever when her and her husband Hud seriously let her down. I found her relationship with Colt interesting, he was clearly smitten with her and it took a little time for those feelings to be returned but it was worth the wait. Colt is a good guy and loyal too with no doubts about his feelings.

I did not like Dana and Hud as much. They were blind to what was going on around them and wrong to dismiss Hilde's concerns so easily. They chose the word of someone they had just met over that of their long term best friend and they suffered for it. They were apologetic and they did feel really bad but I am an unforgiving kind of reader and for me it was not enough.

I liked the way this book ended, everything was tied up nicely but friendships were not exactly fixed. Something's take time to get over and sometimes you do not get over them at all.

There were some issues, it was at times a little far-fetched and there were a couple of things that were bought up and then left and were not concluded, over than that it was fine.

Cardwell Ranch Trespasser is a good thriller with a nice touch of romance I found it to be a quick and enjoyable read.