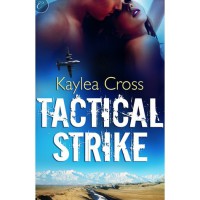 I thought I was going to love Tactical Strike, I really like military novels and I found the blurb for this really intriguing. I really liked the idea of a strong military woman and I was attracted by the trapped behind enemy lines storyline. The truth was that this blurb is a little deceptive and in the end this was not what I thought it was at all.

Candace is not what I would consider a strong female character and I was surprised at her military career to be honest. She was terribly frightened of everything, I understand that war is scary but it was almost as though she had not contemplated the risks of the armed forces until she was actually there. She just seemed a little too oblivious and a little too frightened of everything. Also she is obsessed with her professionalism and gets really offended when anyone questions it, yet she is struggling to sleep at all and instead of seeking help she acts like nothing is wrong, thus potentially putting herself and her crew at risk which does question her professionalism.

The most annoying thing about her is her reaction to Ryan who is annoying but is nowhere near as bad as he makes her out to be. She is constantly referring to him as a player when there is no proof at all that this is true. She is scared that getting involved with him will get her into trouble, which is a real concern as it is not allowed but she drops her fears very quickly and goes from hating him to sleeping with him then to not being concerned about it in a matter of pages.

I preferred Ryan but was irritated at his constant pursuit of Candace. He went after her with a little too much vigour and he needed to calm down a little but he dramatically improved as the book went on and in the end I quite liked him.

I thought the action scenes were actually quite good and the world building was of a good standard. My issue was that there was a lot of military jargon and abbreviations used that I just didn’t understand. There was a glossary at the end but it wasn’t very helpful whilst reading the book, I couldn’t just flick back and forth on my kindle.

Tactical Strike was not quite what I wanted it to be. I did enjoy it and would read more of this series but it is just a regular romance and I was hoping for a little more.