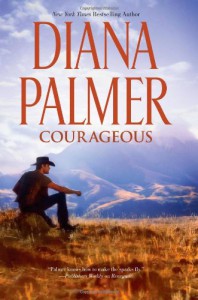 It is rare that I don’t finish a book, even if I hate a it I normally read to the end, anything else feels like cheating but I got to the half-way point of Courageous and had to stop. I just couldn’t carry on.

I think the big problem I had with this is that I just found it really, really boring. I could not get myself interested in it at all. The romance was bizarre and the rest seemed to be taken up with military talk that just did not interest me.

I also had an issue with the characters; I found them to be ridiculous. Peg was extremely naive and I struggled to believe that she was nineteen. Instead she seemed to read like a fourteen year old. Winslow was no better. He is a rancher and mercenary who wants to expand his range whilst freeing a small South American country from dictatorship and looking to get into government once he is finished. It was just so far fetched.

The romance was just odd. He went from zero feelings to everything in a few pages. He bangs on about morals and whilst trying to get her out of her dress. She talks about marriage all the time whilst pretending to be a hussy to attract Wilslow’s attraction because maybe that will make him want to marry her. There was not sense of emotion, there was no growth and I couldn’t get behind it.

This book was just not for me and I hate to quit but I just couldn’t do it.