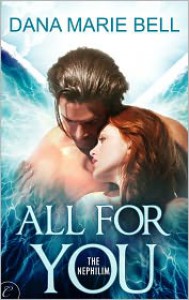 I love a book that can make you laugh and All For You achieved that…for all the wrong reasons. This book was not supposed to be funny but it was. I am going to be frank, this book was not so great but it falls into the ‘so bad it was good’ category and sometimes I found it entertaining even though I probably shouldn’t have.

To begin with I thought I was going to quite like this, the beginning was a bit odd and there was a lot of stuff happening that the reader was expected to understand but can’t because it was not explained but after that things settled down and I found it quite enjoyable and genuinely funny. It was when things got a little dangerous that this book lost the plot.

I have never seen characters make so many mistakes ever. Abby is being stalked, they think it could be her abusive ex who is in jail and they spend a good section of the book pondering if her ex could have broken out of jail...couldn’t someone make a phone call and find out??? Abby’s brother is a police officer! Yet no one thought to pick up the phone. From there more madness arises. Abby and Seth get it on in a outside hot tub, in the middle of the night, in the middle of nowhere, when they know the dangerous stalker is in the area and means to harm them.

Seth, is the most useless protector/hero/nephilim warrior I have ever come across, he fails to keep Abby safe 95% of the time. And despite promising never to let Abby out of sight he manages to do exactly that all the time. The best example of this is when she goes out into the garden to tidy up in the middle of the night. He was quite sweet though and I felt quite sorry for him because he had to put up with Abby.

In all the years I have been reading I have never come across a character so stupid in my entire existence. At one point Abby even says that she is too stupid to live and I have to agree. She is just so ridiculous. She is in town with Seth’s mum and sees her stalker across the road. She decides to sneak away from the people she is with and follows the stalker (who wants to kill her) to an ally way on her own. There is another moment when she gets into an argument with Seth and so she leaves in the middle of the night (after being shot at that day by someone who is still out there) via a boat that she has no idea how to drive.

There were some good bits in this book and I do not think Dana Marie Bell is a bad writer, but despite the laughs this was just not for me.