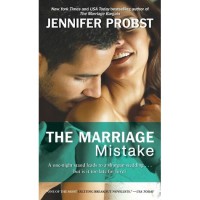 So far I have quite enjoyed the Marriage to a Billionaire series (The Marriage Bargain and The Marriage Trap) and after reading the second book I was sure that the series was getting better with each book. I hop high hopes for this, the blurb sounded awesome, the characters and romance had been introduced in The Marriage Trap and I was excited to read more. It all seemed so promising but unfortunately The Marriage Mistake fell well short of the mark for me.

I didn’t like the characters all that much. Carina was ok but she lacked the passion and spirit she showed in The Marriage Trap. I admired her strength but it came at the expense of her personality.

Max was extremely hard to like and I found him bossy and dull. He orders Carina around and threatens her dates away from her, not because he wants her but because he thinks she should be in a long term serious relationship and because he thinks she is not ready for intimate relations. Carina is in her mid-twenties and isn’t some teenager who cannot make her own choices. It has nothing to do with him but he keeps butting in and insinuating that she will get a ‘slutty’ reputation for flirting. It is all a bit cheeky considering that he is the one who takes her virginity in what was supposed to be a one night stand.

The romance lacked chemistry, I just couldn’t see the sparks between them at all and I really didn’t care if they ended up together or not. The lack of personality and chemistry lead to me finding this book dull and boring.

I hate writing a negative review for this because I am a fan of the series but for me it was just a massive disappointment.