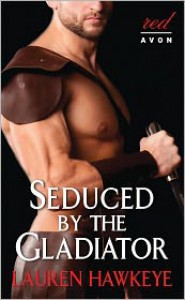 If you stumbled upon this book thinking it was your average historical romance then you would be very, very shocked when you found out what was inside. This is what happened to me, I was intrigued by the idea of a gladiator romance, in my mind I saw Russell Crowe sweeping me off my feet and feeding me grapes off the vine. What I forgot (which is terrible considering I was thinking about Russell Crowe) was that the Romans were well known for their rather open and scandalous sexual appetites.

Seduced by the Gladiator is full of debauchery of all different and various tastes. To say my eyes have been opened would be an understatement. Now, I am no trembling virgin, my tastes are by no means ‘vanilla’ but there were times when this was a little too much for me. A vast majority of the content is consensual but some is mixed with a trace of menacing violence that I did not like. I was also unsure of how far the author would take things and I was a little nervous about what might come next.

Strangely enough it was not the sex (although there was so much that I did start skimming) that made me give this book a low rating. In the end, the problem I had with this was the main character Lilia, I really disliked her. I hated that everyone loved/wants/desired her and that she was so awake if it. She is arrogant and I struggled with her personality. It was a shame because Christus is the opposite; I liked him and thought he could do better.

Seduced by the Gladiator is not for everyone and it is at times extreme with its content, it was interesting enough and I read the whole thing but really it wasn’t for me.