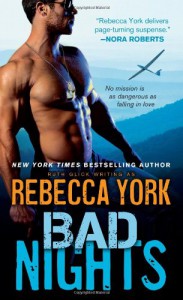 On paper Ban Nights looked like a great read but in reality this failed to hit the spot for me. The storyline sounded pretty good but it just lacked excitement when there should have been plenty.

The writing was alright and I had no trouble envisioning or understanding anything that was going on. It was incredibly unrealistic but I expect that from these types of book so that wasn’t a problem either. The issue for me was a general lack of depth and a feeling that this was trying a little too hard to be cool. I really struggled to connect with this on any level plenty of stuff happened but I struggled to care.

This was especially a problem where the characters were concerned; I found them both bland and uninteresting. Morgan and Jack have the same voice and lack character or personality I wanted to like them, wanted to care but found that fairly impossible due to their boringness. A few of the other characters had a little more personality so hopefully if there are more books in this series interesting characters will not be a problem.

The romance failed to grip me either, again it was bland and lacked chemistry. In certain aspects it moved to quickly, there attraction was instantaneous even though he was gravely injured and she was terrified. From there no matter how much danger they were in they always took a time out to appreciate and think about each other. It seemed unrealistic in its frequency given the circumstances.

Bad Nights had a lot of potential but for me it just didn’t work.