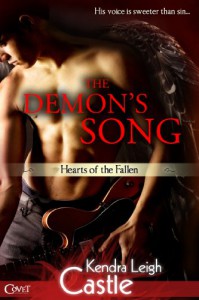 
I am going to be honest I didn’t think I would like this book all that much. I came to this conclusion based on the cover (terrible of me I know.) It was a little too busy and I wasn’t sure if this was a book about an angel or a musician or a mixture of the both. I thought it looked a little cheesy and I wasn’t really sure how the story would come together but I shouldn’t have worried The Demon’s Song was a lot better than I thought it would be and I ended up really enjoying it.

Sofia is just a normal woman living a normal life until looking for her troubled best friend she goes to a new nightclub. There she witnesses a murder of a vampire and suddenly she is in danger. Fearing for her safety fallen angel Phenex agrees to protect her until the danger has past. Despite trying not to they cannot deny their feelings for each other.

The Demon’s Song is a strong paranormal romance with some interested moments. I think Kendra Leigh did a really great job at creating her world and it all came together really well for me. I liked the idea of fallen angels who had worked in hell finding redemption. I also liked the idea of an underground city that hosts the paranormal creatures of the world, I have seen this done before but I really enjoyed this version.

I really liked the characters in this. Sofia was awesome she had a lot of backbone and although she loved Phenex she was not prepared to give up everything for him because he was not prepared to do the same, she would meet him half way or not at all. She was able to take care of herself and cared greatly for others.

Phenex was also really likeable. He was tough and fierce yet had a very adorable and almost shy side when he got romantic. I really liked the way he looked after Sofia and there were some really lovely moments where he would shield her with his wing. I did think he was a little moronic towards the end when he couldn’t understand why Sofia would not want to live with him. I thought it was a clever ploy from the author to show that despite the chemistry they are two different species with two different ways of thinking.

The Demon’s Song really took me by surprise and I liked it a lot more than I thought I would. I will definitely read more of this series in the future.