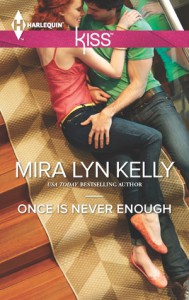 
Once is Never Enough was a sweet and enjoyable romance that I really did like. There were a lot of cute and steamy moments to make a romance fan’s heart melt and just enough drama to keep things interesting.

What really let this book down was the length. It was so short and the story felt rushed from beginning to end. There were several things that happened in the book which were explained later but not actually written about. For example Nicole and Garrett get caught getting it on in a car by a police man. This could have been a fun scene but instead it was cut out and was explained in a conversation later. Also it jumped weeks at a time which left things feeling a little fragmented due to the suddenness of the leaps.

The characters were good. I quite liked Nichole she was cautious but always honest with herself. She had a pretty horrid romantic history so I understood her caution. Garrett was nice as well but less than truthful with himself. He was so sure what he wanted but really didn’t have a clue. I thought he was charming and selfless but he could also be extremely oblivious.