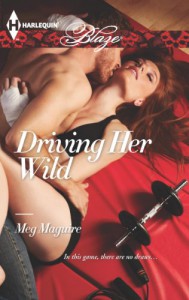 
I have a new book boyfriend and his name is Patrick. I did not expect to come across my new beau in a Harlequin blaze book but I did. He was just so damn perfect and was one of the stand out aspects of this book. Everything else was great as well. I have read the first book in this series so I knew that Meg Maguire could write but this far surpassed Making him Sweat and the reason for that was Patrick.

I hate to go on about him but he really was amazing. I found him really realistic, he wasn’t some Adonis leather pant wearing stud and he wasn’t some multi-millionaire bored sex manic. He was a normal guy with money problems and low self-esteem. He was vulnerable and hurt but he kept a brave face and was determined to defeat the odds. He was adorable and incredibly sweet.

The other main character is Steph an ex MMA fighter. I love the role reversal in this, loved that she was strong and powerful yet still managed to be feminine. There were times when she annoyed me slightly, she wanted to find a man but she wanted him to have money, she wanted security. This got on my nerves for several reasons. Firstly it’s really shallow. Secondly she should go out and make her own money. Thirdly she had fifty grand in the bank which (baring an amazing bit of Lotto luck) is about 50 times the amount of money I will ever have in my life. And finally because this hurts Patricks feelings and that isn’t cool with me. When she meets the klutzy Patrick there is a ton of chemistry between them and more attraction than she has ever felt in her life. But she tells him she is not interested in him because he is not financially secure enough for her. Frankly that is a kick in the nuts and just a horrible thing to say especially when the guy is so sweet and trying so hard to fix his situation.

Thankfully she gets out of this behaviour fairly early on and despite her attempts not to she falls in love with him (impossible not to in my opinion). The romance was adorable it was sweet and sexy and relatively realistic. There was a ton of chemistry between them and the sex scenes were fantastic.

I have read two Meg Maguire books now and loved both of them. She is creeping up my favourite authors list and I cannot wait to get stuck in to more of her writing…especially if there are more male characters like Patrick.