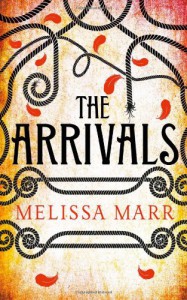 The Arrivals was a marvellous idea, it was completely original and wildly imaginative but not all of it worked for me. It is hard to explain exactly what the main issue with this book was because it wasn’t something I can point out, something was missing and just didn’t feel right.

I really cannot fault Melissa Marr’s imagination. The Arrivals was unlike anything I have ever read. I loved the concept and the dark world of the wasteland. Yet despite loving the concept I do have to wonder if it maybe went a little too far and ran away with itself ever so slightly. I say this because there was a lot that i didn’t understand and a lot of things that were not explained fully. The idea was so brave and rich but it didn’t all make sense and I ended up with more questions at the end than answers.

Despite that there was still much about the world building that I enjoyed. I liked the wild west setting and the varied and fantastical creatures and monsters that filled the world. Marr is great at describing the physical parts of this world.

The characters were hit and miss for me. I liked Jack and thought he was a good leader. His sister Kitty was less likable. She was far too hectic and dramatic and made a big deal out of everything, she walked around like she was the queen of the world and I just couldn’t like her. Her love interest Edgar was far more interesting but he was only there for Kitty and the dramatics the romance provided which was a shame.

Chloe was dull and lacked personality she did have some potential but I never got to know her enough to really care. Her romance with Jack seemed to happen instantly and was incredibly rushed. Out of all the characters Melody was the most interesting but she was a sub character so I didn’t get to know her that well.

The Arrivals was an interesting and brave book that partially worked and partially didn’t. I have no idea if this will turn into a series or not but if it did I would read the next book but wouldn’t rush out to buy it. It was a book I liked but didn’t love.